The impacts of climate change 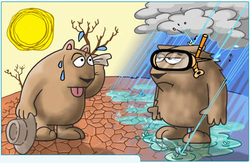 The impacts of climate change vary massively both in terms of scale and location. Meaning some regions are more susceptible to change than others.

The following sites show some of the impacts that we are facing.http://www.bbc.co.uk/climate/impact/ and http://www.climatehotmap.org/

This website shows you the top 100 effects of Global Warming, some you may never have thought of. http://www.americanprogress.org/issues/2007/09/climate_100.html 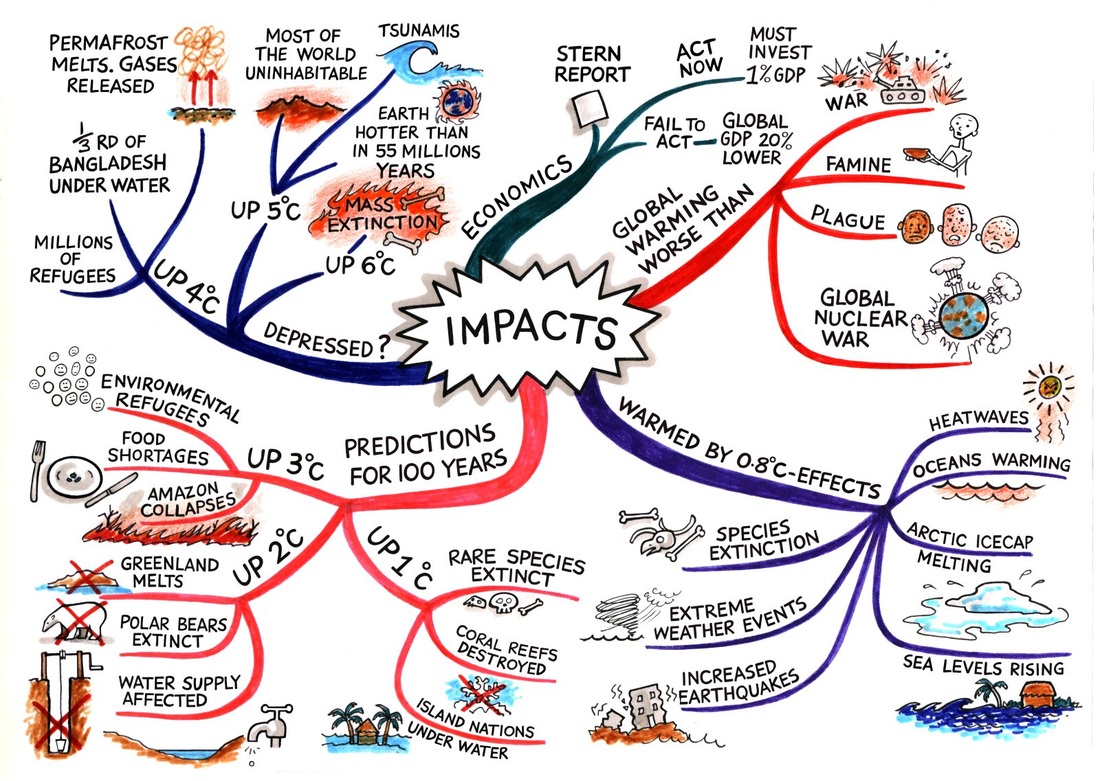 Climate Change and the Arctic 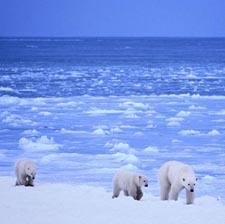 For more information look at http://www.acia.uaf.edu/pages/scientific.html where there are plenty of VERY detailed PDFs you can download. 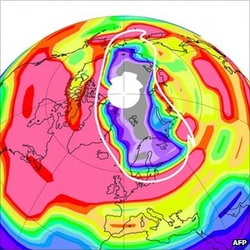 Ozone loss over the Arctic this year was so severe that for the first time it could be called an "ozone hole" like the Antarctic one, scientists report.

The cause was an unusually long spell of cold weather at altitude. In cold conditions, the chlorine chemicals that destroy ozone are at their most active.

It is currently impossible to predict if such losses will occur again, the team writes in the journal Nature.

Early data on the scale of Arctic ozone destruction were released in April, but the Nature paper is the first that has fully analysed the data.

"Winter in the Arctic stratosphere is highly variable - some are warm, some are cold," said Michelle Santee from Nasa's Jet Propulsion Laboratory (JPL).

"But over the last few decades, the winters that are cold have been getting colder.

Ozone-destroying chemicals originate in substances such as chlorofluorocarbons (CFCs) that came into use late last century in appliances including refrigerators and fire extinguishers.

Their destructive effects were first documented in the Antarctic, which now sees severe ozone depletion in each of its winters.

Their use was progressively restricted and then eliminated by the 1987 Montreal Protocol and its successors.

The ozone layer blocks ultraviolet-B rays from the Sun, which can cause skin cancer and other medical conditions.

Longer, not colder Winter temperatures in the Arctic stratosphere do not generally fall as low as at the southern end of the world.

Ozone destruction takes place within polar stratospheric clouds, with chlorine the main culprit No records for low temperature were set this year, but the air remained at its coldest for an unusually long period of time, and covered an unusually large area.

In addition, the polar vortex was stronger than usual. Here, winds circulate around the edge of the Arctic region, somewhat isolating it from the main world weather systems.

"Why [all this] occurred will take years of detailed study," said Dr Santee.

"It was continuously cold from December through April, and that has never happened before in the Arctic in the instrumental record."

The size and position of the ozone hole changed over time, as the vortex moved northwards or southwards over different regions.

Some monitoring stations in northern Europe and Russia recorded enhanced levels of ultraviolet-B penetration, though it is not clear that this posed any risk to human health.

While the Arctic was setting records, the Antarctic ozone hole is relatively stable from year to year.

This year has seen ozone-depleting conditions extending a little later into the southern hemisphere spring than usual - again, as a result of unusual weather conditions.

Chlorine compounds persist for decades in the upper atmosphere, meaning that it will probably be mid-century before the ozone layer is restored to its pre-industrial health. 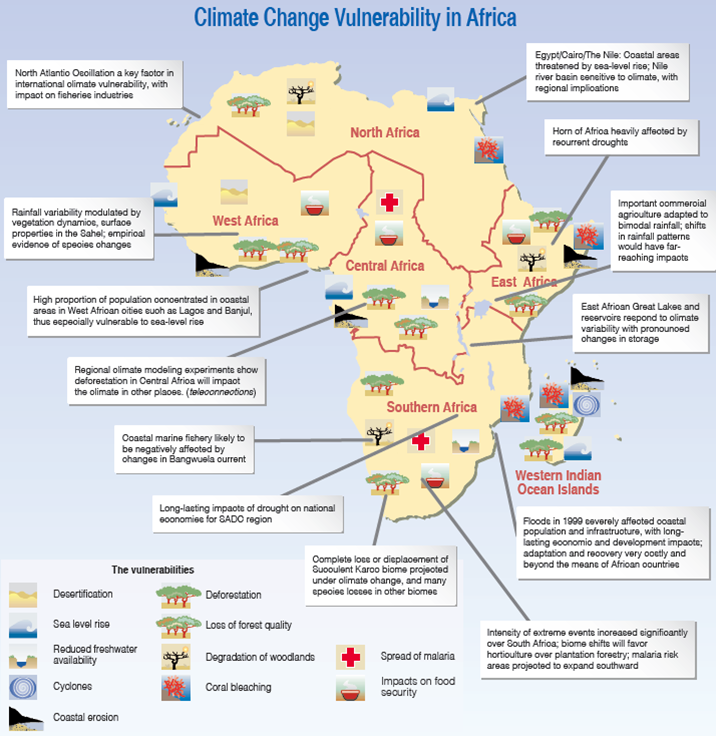 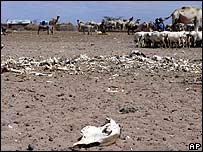 Climate change is already affecting people across Africa and will wipe out efforts to tackle poverty there unless urgent action is taken, a report says. Droughts are getting worse and climate uncertainty is growing, the research from a coalition of UK aid agencies and environmental groups says.

Climate change is an "unprecedented" threat to food security, it says.

It calls for a "climate-proof" model of development and massive emissions cuts to avoid "possibly cataclysmic change".

The report, Up In Smoke 2, updates previous research from the organisations - Oxfam, the New Economics Foundation and the Working Group on Climate Change and Development, an umbrella group of aid and green groups.

It says that although climates across Africa have always been erratic, scientific research and the experience of the contributing groups "indicates new and dangerous extremes".

The continent is, on average, 0.5C warmer than it was 100 years ago, but temperatures have risen much higher in some areas - such as a part of Kenya which has become 3.5C hotter in the past 20 years, the agencies report.

Andrew Simms, from the New Economics Foundation, said: "Global warming is set to make many of the problems which Africa already deals with, much, much worse," he said.

He added that the "great tragedy" was that Africa had played virtually no role in global warming, a problem he said was caused by economic activity of the rich, industrial countries.

Mr Simms said unless climate change was tackled all the "best efforts" to help Africa could come to nothing.

One of the biggest threats is growing climate unpredictability, which makes subsistence farming difficult, the report says.

The average number of food emergencies in Africa per year almost tripled since the mid 1980s, it points out.

But it says that better planning to reduce the risk from disasters, together with developing agricultural practices that can withstand changing climates, have been shown to work and could help mitigate the impact if used be more widely.

Up in Smoke 2 also laments the failure of industrialised governments to help developing countries adapt to climate change.

Between $10bn (£5.2bn) and $40bn is needed annually, the report says, but industrialised countries have given only $43m - a tenth of the amount they have pledged - while rich country fossil fuel subsidies total $73bn a year.

The agencies say that greenhouse emissions cuts of 60% - 90% will ultimately be needed - way beyond the targets set in the Kyoto agreement.

"Climate change is overwhelming the situation in Africa... unless we take genuine steps now to reduce our emissions, people in the developed world will be condemning millions to hunger, starvation and death," said Tony Juniper, executive director of Friends of the Earth.

The report comes two weeks before a key summit on climate change in Nairobi, where delegates will look at the progress made on the Kyoto agreement that requires industrial nations to cut their emissions by an average of 5.2% from 1990 levels by the period 2008-2012.

Delegates will also consider what system should be adopted when the current period ends.